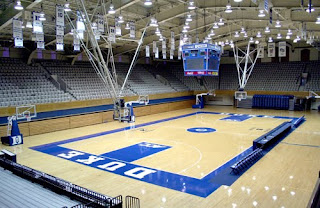 In mid-May (and again this August) I had the privilege of joining 15 ministry colleagues for the Foundations of Christian Leadership Program through the Leadership Education program at . The gathering was wonderful and thought-provoking from beginning to end, but one of the most memorable days was when we toured Cameron Indoor Stadium. For those of you who may not follow basketball, or even college basketball in general, let me explain: Duke University men’s basketball wins a lot. They’ve made 15 final four appearances and have won four national titles including the 2009-2010 season. Not too shabby for what is a relatively small university.

What is stunning when you tour Cameron Indoor is its architecture and size. The outside of the building is Gothic, like the rest of that older portion of the campus. The inside is small — it seats a little more than 9,000 people. That’s smaller than many high school stadiums used to host state tournaments.

While in that venerated setting, then-Dean of Duke Divinity School L. Gregory Jones, explained to our group that Cameron Indoor has had many upgrades (including the addition of air conditioning only a few years ago) but has never been demolished because of the tradition it carries. When renovations are made, pains (and a lot of money) are taken to preserve the wood and brass fixtures.

So, Duke basketball, and more importantly, the church, he argued must hold tradition and innovation in tension in order to live into new ways of being. Traditioned Innovation, a term coined by the Duke Faith and Leadership folks, is defined this way, “rooted in the story of the Trinity, that invigorates the present and envisions the future by honoring the church’s past.”

In other words, we can’t move forward without also knowing where we have come from. A recent discussion about youth ministry highlights this very thought. In a recent article in The Christian Century, Kenda Creasy Dean, associate professor of youth, church and culture at Princeton Theological Seminary, argues that because our churches have lost a connection to and knowledge of our past, we have raised young people who are “almost-Christians.” This argument is based on extensive research completed several years ago by the National Study of Youth and Religion which found that the majority of young people could not speak coherently about the basic tenets of their faith. She writes more extensively on this topic in her new book, Almost Christian: What the Faith of our Teenagers is Telling the American Church.

So, perhaps what we need to do is to delve into our past in order to go forward, look to where we’ve been in order envision where we might journey into the future. This doesn’t mean just doing what we’ve always done because we’ve always done it that way or innovating for the sake of change; rather it calls us into living into God’s call in new and exciting ways that honors where we’ve come from.