Following the Light: Keepin’ it Real

I knew I had seen a light — and it wasn’t just coming from my iPhone screen. When got on the treadmill for a run, swiped through my Podcasts to NPR topics: Religion (I’m a church nerd even at the gym.) and found that the top two stories at the end of the year were about the Pope and Nadia Bolz-Weber.

We were definitely following a different kind of star now.

Nadia Bolz-Weber is the tattooed, self-effacing, card-carrying Lutheran pastor of House for All Sinners and Saints, a new church start in Denver, Colorado, which has become a beacon of hope both for mainline Protestant denominations (the church recently became an official congregation of the Evangelical Lutheran Church in America) and what is known as the emergent church movement. Oh, and she just published a memoir, Pastrix: The Cranky, Beautiful Faith of a Sinner and Saint. It cracked the New York Times Best Seller list. Church books, at least the ones I read, NEVER make the best seller list.

What is so appealing about Bolz-Weber, besides her tattoos, spiked hair and colorful language, is her ability to keep it real. In her memoir (and in many other interviews) she is utterly transparent. She talks openly about her former alcohol addiction, her slow evolution into Lutheran pastoral ministry after leaving the Church of Christ where she was raised from childhood and the resentments, missteps and foibles that get in her way as a pastor and the times when she successfully channels Mary Magdalene (who is tattooed on her forearm) and speaks the truth in love to her congregation and beyond. 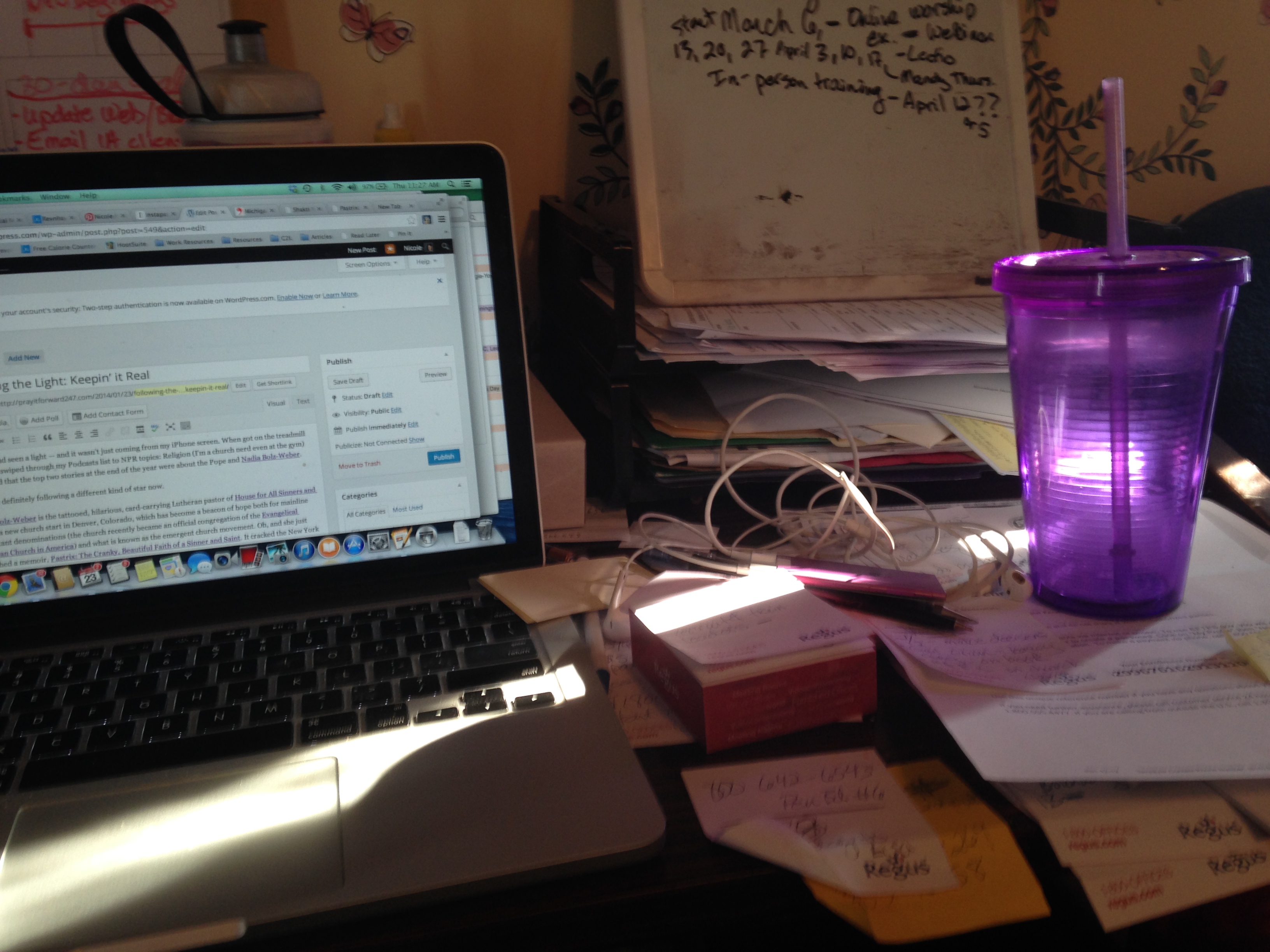 Just keepin’ it real: a photo of my uber messy desk.

She writes in Pastrix:

“Once a seminary student asked to shadow me for two days to see what my life as a pastor was like. At the end, he said, ‘Oh my gosh, you’re basically a person for a living.’ I get to be a person for a living. A person who every morning thinks about her quirky little church and prays, Oh God, it’s so beautiful. Help me not fuck it up.”

Bolz-Weber’s popularity tells us that what people want in a spiritual leader is not shiny perfection, but a glimpse into their messy, imperfect and, yes … beautiful … humanity. With her clearly articulated, practical theology, she reminds us that the church was created to embody God’s abundance grace. Church is not for perfectly dressed, properly behaved men, women and children who already “have it together;” It’s made for the beautifully flawed people who struggle to live faith fully while immersed in messy, chaotic lives.

Here are some links to other recent interviews with Bolz-Weber: