With so many things in flux this year, it’s a good time to take a step back and reassess your 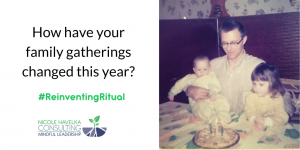 holiday (and other). Join me for a 4-week online retreat, Reinventing Ritual. Register here.

I attended A LOT of weddings in my 20s. These events often served as mini college reunions and were great for catching up with friends I no longer saw every day. At the time, many of us were single females. This meant that, just as we were anxiously awaiting hitting the dance floor, we were beckoned by the smarmy voice of the wedding DJ to come out and compete for who would catch the bride’s bouquet. (If you’re not familiar with the tradition — the woman who catches the bouquet is supposed to be the next one married.)

This tradition, though well-intended, I suppose, really just reminded us of the shame of being a single woman in an allegedly coupled society. We were reminded that we were somehow not complete if we were not yet married. Early on, a few of my friends and I employed a defensive strategy — find the furthest bathroom or some far-away hallway to hide as soon as the DJ mentioned the bouquet toss. This practice served us well until the barrage of college weddings subsided.

Fast forward to a couple years ago and one of my bouquet protesting compatriots was getting married herself. Still single at this wedding, I relaxed into the fun of seeing my old friends at this wedding knowing she would never force me to find an escape route from the dreaded bouquet toss. 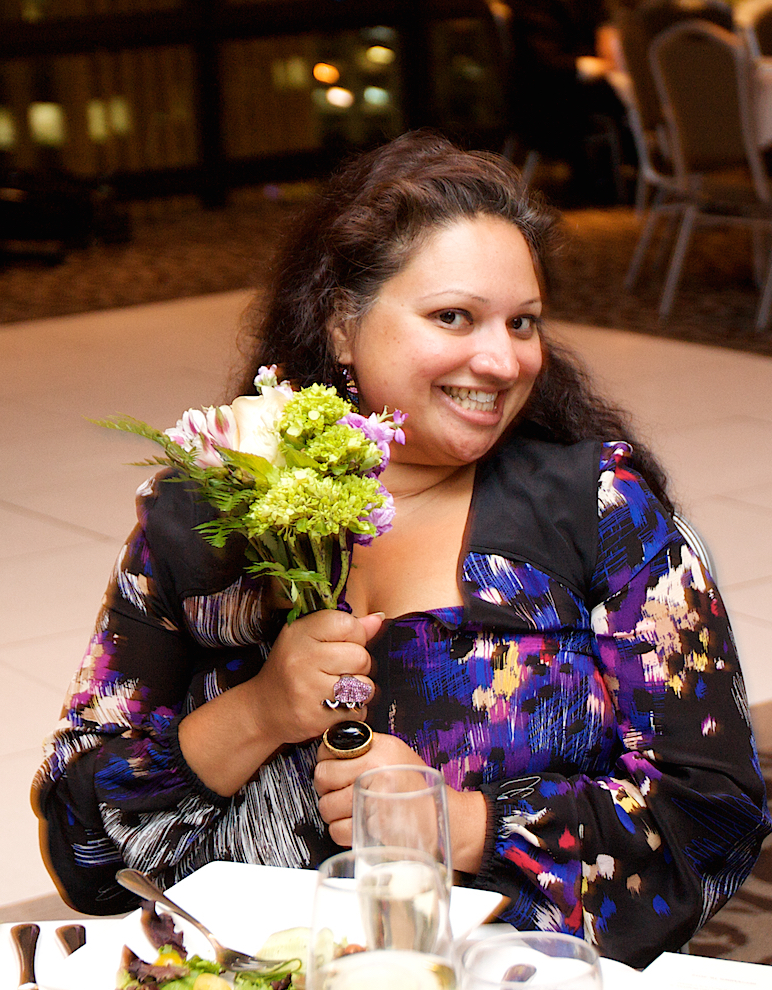 My dear friend Shilpa posing with her bouquet, which was giving at a wedding to ALL the single women in the room. Photo courtesy of Kristina Maldre-Jarosik.

Just as we were finishing the dessert course, something wholly unexpected happened. One of the bridesmaids carried a huge bucket of flowers and handed each and every unmarried woman — whether because of remaining single, being divorced or widowed — her own small bouquet of flowers. I was near tears at the gesture. A once shaming ritual had been transformed into one of affirmation and love.

Because I’m a church nerd, I instantly equated this transformed ritual to the ways we welcome people to our churches. Many people have been shamed by our rituals, even if we (insiders) find them meaningful. Perhaps someone was once arbitrarily excluded from communion and since has never felt quite welcome. Perhaps someone felt pressured into being baptized, even though they weren’t ready. Maybe a frequent visitor is skipping coffee hour not because she is “uppity,” but because she has never been invited and assumes that it is a “members only” thing. Perhaps a parent is dropping off his son to Sunday School without attending worship himself because he feels he has failed too many times to be “worthy” of worshipping together with people who “have it all together.”

What this wedding story demonstrates profoundly is how those rituals, that once may have been hurtful or excluding can (and should) be transformed into rituals of healing and grace. What about taking communion to the streets outside your church (as some of my colleagues have) emphasizing that everyone is welcome to receive? Or offering communion at the local Gay Pride Festival, as some local United Church of Christ churches in my community of Kalamazoo, Michigan did last year? What about inviting people to tell about their memories of baptism — either their own or someone else’s — in order to better understand the breadth of those experiences.

Transforming these rituals requires that insiders think like outsiders, remembering that not everyone has the same positive experience of your tried-and-true ritual as you do. Finding ways to reach out to a new group of people may mean acknowledging the shame and pain that the church has sometimes caused. Being sensitive to this possibility opens up the door for grace-filled conversation which may birth new, more loving rituals more inclusive of all.