This post is the seventh in a series exploring the practice of Drishti (focus on a particular point, traditionally in meditation or yoga poses). My long-time friend and fabulous actor Caitlin Muelder writes about how Math is a portal to connect beyond herself.

We’ll be talking about Drishti (and much more) during my upcoming digital retreat, which begins July 13, 2020.

When Nicole first invited me to participate in this blog, I was very excited. But then I got very nervous.

I was familiar with Drishti and had experienced it (without knowing it had a name), but I had no idea what I should contribute, since I don’t come from a religious background and don’t belong to any particular faith-based group.

So I decided to write about that: how I came to understand and experience Drishti through my multi-theistic meditation of math.

I grew up in the “Bible Belt” of Western Illinois, where my progressive parents raised me and my sister to be open-minded atheists/agnostics.

We were one of only a handful of families (that I knew of) who didn’t go to church. I have very clear memories of my heathen upbringing scandalizing friends in gymnastics: “If you don’t go to church, you go to hell … Don’t you believe in Jesus? What’s wrong with you, you must not know who he is?”

It wasn’t that I didn’t believe in him. I believed he existed. My parents had explained to me and my sister who he was: “Jesus was a great teacher who lived thousands of years ago in the Middle East, who believed in kindness.”

“Oh my God, he wasn’t a teacher,” they would reply: “He was the Son of God and He is the only true God.”

This is where they’d lose me — firstly, because he did teach. Secondly, the whole trinity thing confused me for a long time. But mostly, because we had a bookshelf at home that had several of the world’s religious texts, and they had A LOT of different gods.

They were all there lined up next to each other, even, equal, and on the same shelf. I don’t know if it was intentional or even a conscious act on my parents’ part, but by placing them in that way, I got a clear message — these texts were different expressions, interpretations, and explanations of the same thing, and none was more true than the other.

As a result, I became a sort of faith-curious person. I don’t consider myself to be religious in any way, but I do feel a connection to something bigger than myself, yet of myself, something intimately infinite, something personal and profound.

Over the years, my spirituality evolved into a diversely divine salad bar of philosophy and faith: a little Kant and Hume to keep me curious and questioning, a good dose of Buddhism to keep me mindful, and a plethora of pagan pals from Norse, Greek, Celtic, Egyptian, and Santeria traditions that speak to me on an inspirational and aspirational level.

My spiritual beliefs became multi-theistic, pantheistic, or perhaps non-theistic depending from which angle you look. They are all and none and one, at the same time.

My spiritual beliefs became multi-theistic, pantheistic, or perhaps non-theistic depending from which angle you look. They are all and none and one, at the same time.

But something was missing, the leafy-green creed of my salad bar — something that could bind all these beliefs together, and provide a system for evaluating and understanding our universe. I found it, in Math, and Math led me to understanding Drishti.

I had brief moments of being “in the zone” as athletes refer to it during gymnastics, soccer games, or while on a long run. And I had felt feelings of focused expansion while performing on stage, living the Stanislavski principle of finding the moment in listening to your scene partner, focusing your attention on them. But I had never found a way to access that feeling in my real life, with any regularity, until I found my higher appreciation of Math.

As a person who has spent her career in the arts, I wanted a hobby to sort of “balance me out.” So I started reading about Math. Given how unpredictable an actor’s life can be, I was looking for something I could count on. (No pun intended.) So one day, I went to Barnes’s and Nobles just north of Lincoln Center, picked up a copy of Stephen Hawking’s A Brief history of Time, got a coffee and started to read.

By the time I got to the section on Quantum Entanglement, it as if the time and space around me had disappeared. I was transfixed and transported to a place in my mind where I was in the intimate here and now while also outside myself in the outer regions of the universe. I felt a personal understanding of Quantum Entanglement, or as Einstein called it: “spooky action at a distance.” Reading about Black Holes, Schrodinger’s Cat, Non Locality, and Wave Fluctuations gave me a new perspective into our world.

I was transfixed and transported to a place in my mind where I was in the intimate here and now while also outside myself in the outer regions of the universe. I felt a personal understanding of Quantum Entanglement, or as Einstein called it: “spooky action at a distance.”

To quote Jodie Foster’s character, Elenor Arroway in the movie Contact, “Math is the only universal language.” At its most fundamental level, the universe is Math. Even the elements in our bodies are made up of tiny bits of electromagnetic pulses, that vibrate a mathematical symphony, to a rhythm or “count” that makes us, us.

Math is the comprehending of patterns and principles. It is in a way a kind of philosophy. And it gives us so much to contemplate. We can focus on a number, like Pi for instance: a number that can be calculated, and yet is infinite. Pondering Pi fills me with a sense of awe, wonder, humility, and gratitude.

But the croutons of my Math-based spiritual salad are fractals. A fractal is a never-ending pattern, infinitely complex, creating self-similar patterns, across different scales, by repeating a simple process over and over in an ongoing feedback loop.

So, when I focus on a fractal, I practice Drishti. As I gaze at a singular spot within a fractal, I’m led to a larger pattern of mathematical principles, expressed in stunning beauty, that demonstrate a belief shared by all my favorite faiths from the bookshelf of my youth — “as above, so below.”

Enjoy the other posts in this series on Drishti: 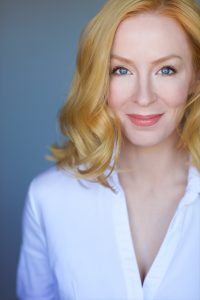 Caitlin Muelder is a classically trained actor, writer, director, and dialect coach who has performed on Broadway, television, and in feature films. A wanna be physicist, liberal political junkie, and animal lover, Caitlin is midwesterner at heart. She lives in California with her husband and their two cats. Find her on Imdb, Instagram and Twitter.